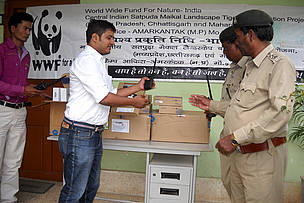 Providing connectivity to wildlife
The tiger reserves of Satpuda Maikal Landscape (SML) in Central India are important source populations of the tiger. In simple terms, they hold tiger populations that can sustain themselves over a period of time and the tigers can move out to populate other forests.

The forests surrounding these tiger reserves are important corridors for the long term survival of the tiger in the landscape as they offer the space and cover for the tigers to disperse from these source populations. There are a handful of corridors in the landscape that are still relatively intact. Of these, WWF-India is currently working at the grassroots level in the two very critical ones: the Kahna – Achanakmar and Kanha – Pench corridors. The territorial division forests of Dindori district form the corridor between Kanha tiger reserve in Madhya Pradesh and Achanakmar Tiger Reseve in Chhattisgarh. WWF-India is working closely with various stakeholders, among the most important being the landscape’s forest departments, who are key to the long term survival of these corridors.

Supporting the guardians of tiger
WWF-India has been supporting the forest departments of the landscape with infrastructure since 1999. Continuing with the same, in September 2010, WWF-India provided 20 wireless handsets, 300 winter jackets, 300 shoes and 300 pullovers to the Conservator of Forests, Dindori Forest Division. The infrastructure was handed over by Mr. Sunny Shah, Senior Project Officer, SML WWF-India at a simple ceremony.

Says Sunny, “Dindori Division is a crucial part of the Kanha - Achanakmar corridor. The division has ten ranges and we provide support to the Karanjia range, which is towards the east and very close to Achanakmar Tiger Reserve. On its western side, a part of this division is contiguous with Phen wildlife sanctuary, which is a satellite core of Kanha Tiger Reserve. We are helping secure corridors for the safe movement of the tiger and other wild species. Apart from the current support, we have also provided vehicles and metal detectors to enhance patrolling inside the forests, particularly the unreachable areas”.

He adds, “The infrastructure capacity of Dindori Division needs to be improved. We have observed an increase in wildlife movement in the area and it needs protection from unwanted activities like poaching of wildlife and timber. The forests are currently well occupied with sal, which is a good habitat for tiger and its prey. These are also an abode of many tribal communities.” 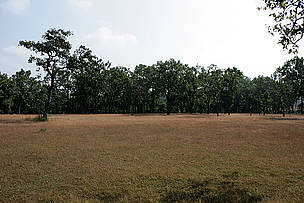 A view of the Dindori forests
© Ameen Ahmed/WWF-India Enlarge 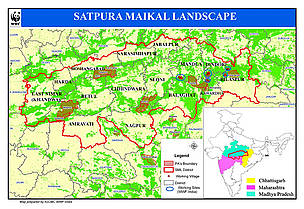