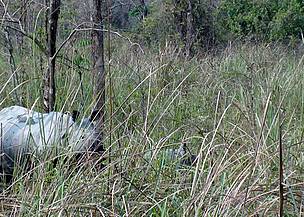 Rhino 8 with her new born calf in Manas National Park, Assam, India
© Bipul Nath /WWF-India
Amidst the recent spurt in poaching of rhinos in the north east Indian state of Assam there is a reason to cheer. Two translocated rhinos in the Manas National Park of the state have given birth. Rhino 17, translocated to the Park in 2012 and Rhino 8, translocated to the Park in 2011, were sighted on 23rd March and yesterday respectively with their new born calves by WWF-India researchers and Assam Forest Department staff involved in post release monitoring of the rhinos.

The two rhinos were translocated under the aegis of the Indian Rhino Vision 2020 programme (IRV 2020) - a joint initiative of the Department of Environment and Forests, Government of Assam; WWF-India; the International Rhino Foundation (IRF) and the US Fish and Wildlife Service, along with the Bodoland Territorial Council and supported by a number of local organisations. A total of 18 rhinos – ten from the Pobitora Wildlife Sanctuary and eight from the Kaziranga National Park have been translocated so far to the Manas National Park. The successes achieved under the programme until now are a result of the commitment and support extended to it by the different partners, stakeholders, local communities and forest staff of the different Protected Areas of Assam.

Under IRV 2020, Manas National Park has been provided much support to upgrade its infrastructure and monitoring capabilities to enable better protection for the translocated rhinos. It is now important to ensure the safety of these newborn calves and their mothers as well as the other rhinos in Manas so that the vision of establishing a viable rhino population is achieved over the long term.

WWF and IRF are excited at the prospect of partnering with the Assam Forest Department to return rhinos to the Laokhowa-Burachapori complex in Assam in the coming years, a site from where they were poached out in the 1980s.

The high demand for rhino horn in the illegal wildlife trade continues to be the biggest threat this newly established rhino population is facing with three translocated rhinos having fallen prey to poachers in the past two years. WWF and IRF, as constituents and partners of the IRV 2020 programme, continue to support the Assam Forest Department in its endeavour to provide a safe and secure future for Assam’s rhinos spread across different Protected Areas.

Note: High resolution photographs can be downloaded from: http://www.sendspace.com/file/bkas4j 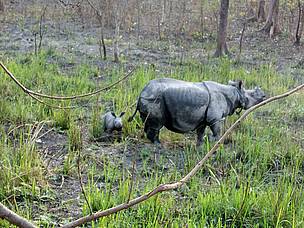