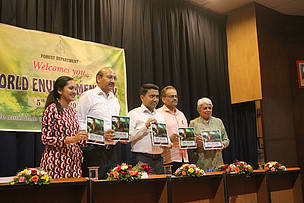 © WWF-India
“Corals and Crabs” jointly published by the Forest Department of Goa and WWF-India, was released by the Hon’ble Chief Minister of Goa  to commemorate World Environment Day.

Goa: Dr. Pramod Sawant, Hon’ble Chief Minister of Goa, released a book on the marine life in the reefs of Goa titled “Corals and Crabs”, jointly published by the Forest Department of Goa and WWF-India at the Goa Science Centre Auditorium in Panjim on Tuesday. The release was in commemoration of World Environment Day, globally recognized on 5th June.

Corals and Crabs is a display of the stunning marine biodiversity that Goa harbors in its coral reefs giving a glimpse into the lesser known reefs around Grande Island. Limited accessibility to coral reefs has meant that these ecosystems are lesser studied and therefore less understood. Corals and Crabs is a first step towards bridging this existing knowledge gap and bringing amazing marine species found in the reefs of Goa such as Stingrays, Lionfish, Ghost Pipefish, Decorator Crabs and a whole array of Sea Slugs, to the forefront. The book is a quick introduction to marine life of Goa for students, tourists and locals, is also an induction into the world of marine conservation.

The book features over 30 stunning photographs of marine habitats and biodiversity, taken during WWF-India’s underwater surveys at dive sites around Grande Island, in 2018, to assess the impact of diving on the reefs around the island. Increasing marine based tourism has made protection and monitoring of these habitats critical. Experiences such as scuba diving, snorkeling and dolphin watching, while an important source of revenue for the state and an enriching experience for tourists, tend to mount pressure on marine habitats and wildlife. Despite increasing tourist traffic at these sites, the survey revealed that the some coral species at Grande Island continue to thrive and host a variety of marine life.

While releasing the book, Dr. Pramod Sawant, Hon’ble Chief Minister of Goa said “it is wonderful to know that just outside Vasco, there is an island teeming with marine life. I am also amazed at the photographs taken by the young research team.”

The event also included a prize giving ceremony for winners of paintings, drawing and poetry, conducted by the Forest Department, all which had environmental themes.

Speaking about the importance of outreach and awareness to support conservation, Dr Sejal Worah, Programme Director, WWF-India said “This book will be an added resource for visitors to appreciate the marine biodiversity of Goa and for concerned citizens to monitor changes in the coral reefs over time”.

About WWF-India:
WWF-India is one of India’s leading conservation organisations with programmes and projects spread across the country. The organisation works towards the conservation of biodiversity, natural habitats and the reduction of humanity’s ecological footprint. The mission of WWF-India is to stop the degradation of the earth's natural environment and to build a future in which humans live in harmony with nature. To know more, log on to: www.wwfindia.org