‘Wearing is Stealing’: TRAFFIC urges not to wear fur or other products made from protected otter species | WWF India

‘Wearing is Stealing’: TRAFFIC urges not to wear fur or other products made from protected otter species 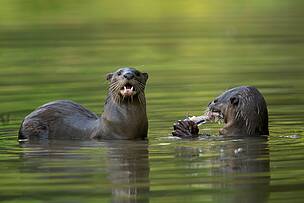 Smooth coated otter
© JJ Harrison
New Delhi: The energetic and playful otters are the top predators of the river ecosystem in India and have been the silent victims of illegal wildlife trade for decades. They are poached mainly for their soft and lustrous fur used to make coats, hats, linings, and other fashion items.

To highlight this, TRAFFIC’s India Office with support from WWF-India has launched a new online campaign that is raising awareness about the illegal trade of otters and their products. The key message “Wearing is Stealing” aims to enlighten wildlife consumers that products made from otters’ fur and other body parts, are prohibited for sale and purchase in India, and any kind of indulgence can lead to imprisonment, a fine or both.

With this campaign, TRAFFIC is releasing a new factsheet[1] on otters to help people understand the species, its role in the ecosystem, protection status and the threats they face due to illegal wildlife trade.

India is home to three species of otter; namely the Eurasian Otter Lutra lutra; the Smooth-coated Otter Lutrogale perspicillata and the Asian Small-clawed Otter Aonyx cinereus. All of which are protected under India’s Wildlife (Protection) Act, 1972. However, despite the legal protection they are being traded illegally.

A TRAFFIC study[2] that analysed seizure data between 1980 and 2015 found a total of 161 reported otter product seizure cases in 15 countries across Asia, involving a total of 5,881 specimens. In the study, India’s otter product seizures totaled 83 cases; more than half (51.6%) of all those recorded under the study. Of the total identified seized animals, most were Eurasian Otter (824 individuals, 14% of total), followed by Smooth-coated Otter (79 individuals, 1.3%), and Small-clawed Otter (31 individuals, 0.5%). Globally, the trade in live otters as pets has been a threat especially to Smooth-coated Otters, as they have increasingly been found advertised for sale on online portals.

Dr Saket Badola, Head of TRAFFIC’s India office said, “ Earlier investigations revealed presence of otter skins in many seizures of tiger and leopard skins being smuggled from India to other countries”.

“Awareness among the general public and enforcement agency is the first step towards fighting wildlife crime against otters and other lesser focused species. The current awareness campaign is a step forward in this direction and will also throw light on many more species found in illegal wildlife trade such as seahorses, red sand boa, Tokay Gecko and monitor lizard in the coming weeks,” Dr Badola added.

Otter plays an important role in transferring nutrients from one ecosystem to another as it takes in nutrients from the aquatic ecosystem by feeding upon fish and other aquatic organisms then transfers those nutrients by depositing their waste on land. Besides, illegal wildlife trade otters are also suffering due to habitat destruction and degradation because of expanding agricultural practices, deforestation, quarrying, soil erosion, and climate change. Download TRAFFIC’s factsheet on otters to know more.

About the campaign:
The new online campaign has been launched by TRAFFIC, India office and WWF-India to create awareness about various wildlife species found heavily in illegal wildlife trade in India. In the coming weeks, TRAFFIC and WWF-India will use this opportunity to feature otters, seahorses, red sand boa, Tokay Gecko and monitor lizard. Follow the campaign on FACEBOOK and TWITTER. 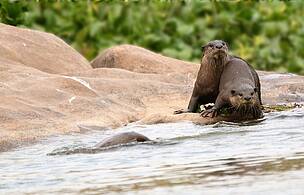