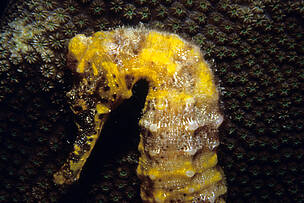 Seahorse
© Anja G. Burns / WWF
New Delhi: People are being urged to think twice before they buy seahorses for their aquariums or as curios as this ecologically important marine animal is also protected under India’s wildlife laws says TRAFFIC and WWF India. Seizure reports indicate that seahorses Hippocampus are the victims of large-scale curios and aquaria trade in India. Live wild-caught seahorses are traded to aquariums from all over the world, whereas dead seahorses are used as ingredients in traditional medicines, used to make jewellery, key chains, souvenirs etc. Owing to their plated body structure, they maintain their appealing shape even after death, making them a desired article for sale as curios.

More than 3,000 seahorses were discovered in a container intercepted by the Forest Department in 2019 at Mumbai Airport. Another seizure in Nathu-la revealed a trafficking trade route at the Indo-national border, where enforcement officials intercepted 56 kgs of dried seahorse, destined for China.
To drive home this message, TRAFFIC’s India Office with support from WWF-India has launched an online campaign for raising awareness about exploitation of seahorses in the country. The key message “Possessing is Stealing” aims to enlighten people  that protected marine animals don’t belong in their aquarium and urge them to not buy such species as their buying choice will have a detrimental impact on wild populations.

All seahorse species found in India are protected under Schedule I of Wildlife (Protection) Act, 1972 making their sale, purchase, or any other form of utilization of the species, or their parts and derivatives, illegal and punishable under the law. Trading them internationally is further regulated under CITES as all seven species, found in Indian waters, are listed under Appendix II.

Dr Saket Badola, Head of TRAFFIC’s India office said, “Despite stringent legal protection under India’s Wildlife (Protection) Act, seahorses are consistently poached and traded in the country. The vast quantities found in wildlife seizures points to the urgent need for law enforcement to tighten the net on this illicit trade. However law enforcement needs to be supported by the actions of the general public to drive down demand. They can do this by simply choosing to not buy seahorses.””.

Other than for curio and aquaria trade seahorses are also used as a key ingredient in traditional Asian medicine where communities believe in its anti-inflammatory properties and use it to cure diseases like asthma and arthritis. Additionally, superstitious beliefs in India, adding to poaching pressure, include their use as a good luck charm to prevent disorders such as epilepsy.
Seahorses are flagship species of their habitats, which are also inhabited by seagrass beds, mangroves, coral reefs and seaweeds. In the marine food chain, they play an indispensable role of predating on bottom-dwelling organisms and small shrimps, and are themselves preyed upon by various invertebrates, fish, sea turtles, seabirds and marine mammals. Due to their strong link in the food chain,  depleting their numbers may jeopardize the balance of coastal ecosystems.
With this campaign, TRAFFIC is also releasing a new factsheet[1] on Seahorses to help people understand the species, role in the ecosystem, protection status and the threats faced due to over exploitation and illegal wildlife trade. You can download the seahorse factsheet at https://join.wwfindia.org/illegal-wildlife-trafficking/


About the campaign:
The new online campaign has been launched by TRAFFIC, India office and WWF-India to create awareness about various wildlife species that do not get the deserved conservation attention but are heavily poached and trafficked. In the coming weeks, TRAFFIC and WWF-India will use this opportunity to feature five such species viz., otters, seahorses, red sand boa, Tokay Gecko and monitor lizard. The campaign is live on FACEBOOK and TWITTER.