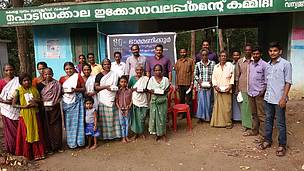 CFL distribution at Peppara WLS
© WWF-India
January 2016 - CFL Distribution at Peppara Wildlife Sanctuary
Following the Earth Hour 2015, with the support of KSEB, under the banner ‘Beyond the Hour’ Kerala State Office distributed CFLs in Peppara WLS at Podiyam and Podiyakkala tribal settlements for 206 families. Each family was given two each for reducing their power consumption. It was an exclusive informal programme of conveying the message of mitigating the Climate Change and Global Warming.

February 2016 – Project under Paaristhithikam 2015-16 (State Environment Awareness Campaign)
WWF-India, Helping Hands Organisation (H2O) and Kerala My Own Country (KMOC) jointly organised Paaristhithikam 2015-16 – the State Environment Awareness Campaign of Dept. of Environment and Climate Change, Govt. of Kerala with the Beach Clean-up Campaign in Shanghumugham Beach, Thiruvananthapuram. The programme included installation of six litter-bins, exclusively designed and fabricated by WWF-India, along the beach road for tourists to responsibly dispose the litter generated from ice-creams, toys and snacks sold in the area.The students of Fine Arts College, Thiruvananthapuram came up voluntarily to do art work along the outer wall of the Indoor Stadium in Shanghumugham. Beach Clean-up was carried out by college students and volunteers along with the cleaning staff of Thiruvananthapuram Corporation and DTPC. Volunteers from TCS were also present in the event and they sponsored a whole new set of cleaning equipment to the cleaning staff.

April 2016 - Tree Conservation Campaign
Following the Earth Day theme, ‘Trees for Earth’, the volunteers and staff carried out a Tree Conservation Campaign within the Museum & Zoo Compound on 28th and 29th. The hoardings with the captions highlighting the need for planting and protecting trees, printed and mounted on cardboard, were tied to the trees standing within the M&Z Compound with the ultimate aim of sensitizing the visitors. Museum & Zoo Compound is a place where thousands of people from all walks of life come in for morning and evening walks. Since school summer vacation is going on, there are lots of visitors also from across the State. On 3rd June 31 Student Participants of the Summer Vacation Camp joined us in this campaign and they also contributed in the effort to erect 25 hoardings. Totally 52 hoardings have been erected on trees within the M&Z Compound.

May 2016 - Ongoing project ‘Laterite Mining and its Environmental Impacts in Kerala’
The project awarded by Department of Environment and Climate Change, Government of Kerala has been completed in its full sense with regard to secondary and primary data collection, analysis and report writing. The details on the various extent of laterite mining, mainly legal and other details on illegal mining, its direct and indirect primary and secondary impacts, labour related issues and occupational hazards have all been comprehensively detailed in the report. The report will be submitted to the Director, DoECC.

June 2016 – Rain Walk for World Environment Day 2016
On World Environment Day, Sunday 5th June, WWF in association with the Kerala Forests & Wildlife Department, Thiruvananthapuram Division conducted a ‘Rain Walk’ from Kallar to Ponmudi with 60 participants ranging between the age span of 10 to 60. The Rain Walk was inaugurated by Smt.T.Uma IFS, DFO (Thiruvananthapuram) and led by WWF officials and volunteers with the support of the Forest Department Protection Staff. Tips and tricks of ecosystem interpretation, bird watching, fun-filled moments with rain songs, clean up drive etc. were additional bonuses for the participants of the 13 kilometer long walk along the forest path.

July 2016 - Bird Atlas in Thiruvananthapuram
Trivandrum Bird Atlas had a royal start with 42 bird watchers, including expert birders and budding bird watchers at Kowdiyar Palace on Saturday morning. The district-level inauguration held in front of the Kawdiar Palace, which in itself is one of the sampling sites at 7.30am. Sri.C.S.Yalakki IFS, Principal Chief Conservator of Forests (Social Forestry) inaugurated the survey in presence of Prince Adithya Varma and his wife Smt. Resmi Varma, also a bird enthusiast. Two sessions of birding was done within the palace premises resulted 14 species of birds though it was raining. The ‘Pocket Guide to Birds of Kerala’ was released by Prince Adithya Varma. Renjan Mathew Varghese, State Director of WWF-India, Sri.JRAni, Asst. Conservator of Forests, Sri.Ramesh MB of TNHS and Sri. A.K.Sivakumar, Coordinator of the Survey also spoke in the occasion.

August 2016 - Teachers Training Workshop on Sustainability Education
The WIPRO earthian 2016 programme was launched in the Capital City of Kerala under the initiative of WWF-India with the support of C.P.R. Environmental Education Centre (CPREEC), Chennai. It was a Teachers Training Workshop on 9th August held at Museum Auditorium in which 45 Teachers from 35 schools in the district attended the workshop. The workshops had two technical sessions on ‘Water and Sustainability’ and ‘Biodiversity’ which were led by Renjan Mathew Varghese, State Director and A.K.Sivakumar, Senior Education Officer of WWF-India. The Teachers and students were briefed about the objectives, themes, methodology and expected outcome of the programme by Sri.U.T.Arasu of CPREEC. WIPRO earthian was represented in the workshop by Ms. ArathyHanumanthappa who gave a national view of the programme and its achievements over the years.

September 2016 -Common Bird Monitoring Programme (CBMP) 2016
“Green Partnership Programme”, a network of NGOs working in the field of bird documentation across the State has come together to conduct the Common Bird Monitoring Programme (CBMP), also known as Onam Bird Count as the same happens during the Onam holidays, from 16th to 19th of September 2016. WWF-India is the coordinating agency for the three southern districts. We have conducted the Orientation Programme for Onam Bird Count for Thiruvananthapuram and Kollam districts on 5th and 6th September 2016 at Govt. Women’s College, Thiruvananthapuram and SN College, Kollam respectively. This was a day-long (10.00am to 4.00pm) programme with three sessions conducted with the support of Social Forestry Wing of Kerala Forests & Wildlife Department. The event at Thiruvananthapuram was inaugurated by Sri. J.R. Ani, Asst. Conservator (SF) Thiruvananthapuram and at Kollam by Sri. Koshy John, Asst. Conservator (SF) Kollam. The sessions were led by Senior Education Officer, Mr.Govind G., Mr. Sujith V. Gopalan and Mr. Jaichand Johnson, WWF-India volunteers and experts in the field.

October 2016 - Wildlife Week 2016
Kerala State Office observed Wildlife Week 2016 at MM NSS College, Kottiyam on 5th October 2016. Sri.Shanavas A., Wildlife Warden of Shendurney WLS inaugurated the programme that was chaired by Dr.G.Girijadevi, Principal of the College. Session on ‘Wildlife - issues and concerns’ was led by Sri. Renjan Mathew Varghese, State Director and ‘Urban Wildlife’ by Sri. A.K.Sivakumar, Senior Education Officer. In the afternoon session, the documentary ‘Home - Our Garden of Eden’ was screened for the benefit of the participants to understand the wildlife around our homes itself.

November 2016 – Salim Ali Day Bird Walk
The monthly Sunday Bird Walk was rescheduled as Salim Ali Day Bird Walk on 12th Saturday in Kallilappara forests of Shendurney WLS. It was a joint programme of WWF-India and Kerala Forests & Wildlife Department in which 19 birders participated. The entire team was divided into four teams and all the teams had wonderful birding from 7.00am to 11.30am. The birding observed 96 species of birds including 7 endemic and 15 migratory species. 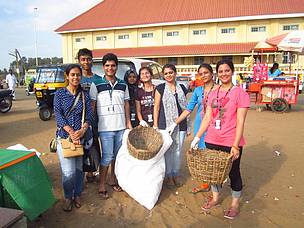 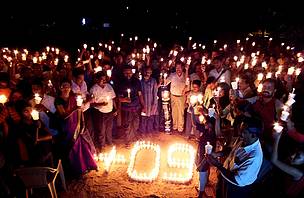 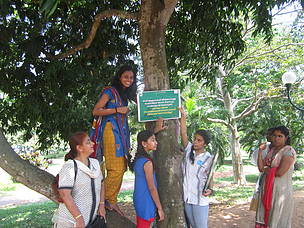 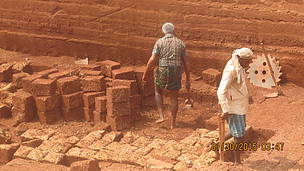 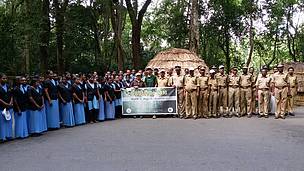 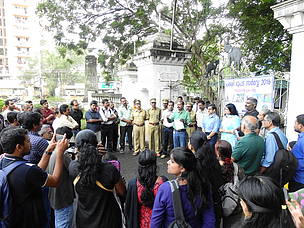 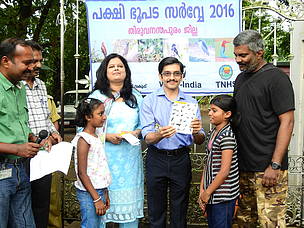 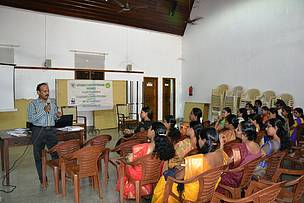 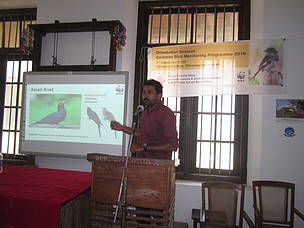