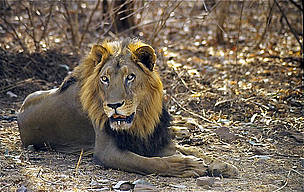 Asiatic Lion in Gir National Park
© Khalid Pasha/ WWF-India
WWF-India hands over three vehicles to the Gujarat Forest Department
Gir Forest National Park (NP) in Gujarat is the only remaining natural habitat where the Asiatic Lion can be found. In spite of its status as a Protected Area (PA) and the strong protection measures taken by the Gujarat Forest Department, threats to its habitat and lion population still persist. Poaching and habitat degradation (three major roads and a railway track pass through the park) are the prime challenges to the long term survival of these lions. Also, there are three big temples inside the National Park that attract a large number of pilgrims, causing disturbance to the area’s wildlife. Despite these threats, due to an overall improvement in the habitat conditions the population of lions has been increasing steadily since 1974.

WWF-India's support to Gir dates back to 2002, when two motorcycles were provided to the forest department staff. To prevent the deaths of the lions by falling in to the many dry, unused wells around the PA, WWF-India supported the barricading of 530 wells in 2007-09 surrounding Gir, with the involvement of the forest department and two other NGOs. More importantly, WWF-India also engaged the agencies to sensitize locals about the importance of farmers’ participation in the process. Also, an out reach programme to spread the message to 25 Communities (about 5000 people) on avoiding conflicts with lions was carried out.

WWF-India believes such support will lead to more effective patrolling to protect the lion from poaching and to mitigate human-lion conflicts, and thus help in the long term survival of lions. 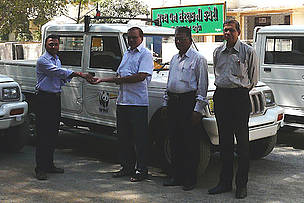